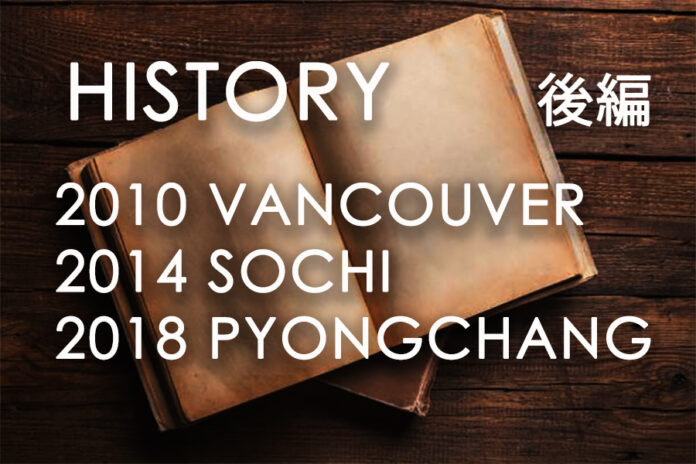 Snowboarding, which made its debut at the 1998 Nagano Olympics, is finally moving toward the leading role of the Winter Olympics at the 2010 Vancouver Olympics. One of the main characters was Shaun White.
At the PyeongChang Olympics, slopestyle was added as a new event, and at the Sochi Olympics, big air was also added.

The snowboarding competition of the Vancouver 2010 Olympics was held at Cypress Mountain.
In the men’s halfpipe, Shaun White won the gold medal for the second time in a row.
Shaun later answered in his Instagram Q & A, “What was the best moment of the Olympics so far?” “The moment I made a Double McTwist at the Vancouver 2010 Olympic Winter Games.”

Scotty Lago, the US national team who won the bronze medal, controversial photos surfaced at the evening party; he returned home before the end of the games.

The size of the halfpipe has increased since the Vancouver 2010 Olympic Winter Games. It has changed from 18 foot in size to 22 foot. As a result, the air became higher and the number of revolutions of the technique increased. The more difficult techniques have led to a stronger appeal of snowboarding to many.

In the women’s halfpipe, Kelly Clark was said to be a gold medal candidate, but in reality Australia’s Torah Bright won.
Bright was chosen to carry the flag for Australia at the opening ceremonies, and qualified for the 1st spot for the final of the women’s halfpipe, despite suffering two concussions beforehand in training. Crashing out in her first run in the final, Bright was the first competitor to make a second run. With a successful second run, she posted a score of 45.0, which remained the highest score through the field’s second run.

In the first run of the men’s Parallel GS final, Anderson was 0.76 seconds behind his opponent Karl, but in the second run he won a come-from-behind victory! A local Canadian hero won the gold medal and the venue was lively.
Anderson retired following the Vancouver 2010 Olympics but returned to snowboarding to compete in the Sochi 2014 Olympics, where he was the oldest competitor and ultimately finished in fourteenth position.
Anderson competed in the 1998, 2002, 2006, 2010, 2014, 2018, Winter Olympics.

Maëlle Ricker won an gold medal in the snowboard cross event, to become the first Canadian woman to win a gold medal on home soil at the Olympics.

Ricker won her quarter-final with ease, but because of only finishing third in qualifying, was placed in a semi-final with gold medal contender Lindsey Jacobellis. In the run, however, Jacobellis was disqualified for missing a gate and Ricker carried on, qualifying for the A-final.

In the medal final Ricker again took a large lead out of the starting gate and won the gold medal with relative ease.
Ricker won the gold just minutes from her childhood home in North Vancouver and described the Olympic victory “like a crazy dream”.

Snowboarding at the 2014 Winter Olympics in Sochi was held at the Rosa Khutor Extreme Park.
At the Sochi Olympics, slopestyle, a popular snowboarding event, and parallel slalom, an alpine event, have also been added.
Slopestyle was selected as the opening game for snowboarding.

One of the medal candidates, Norwegian Torstein Horgmo, was unable to participate because he fell and was injured during public practice.
Shaun White was originally scheduled to play in slopestyle, but she avoided it shortly before. Perhaps he sensed the danger.
A crash in practice Horgmo, who fractured his collarbone, and complaints from other athletes that some jumps were too steep prompted organisers to modify the slopestyle course in the week before the Games.

In the Men’s Halfpipe, Iouri Podladtchikov (Switzerland) successfully made his signature trick, the Cab double cork 1440(he called the “YOLO Flip” ), and won the gold medal.

The silver medal was Ayumu Hirano and the bronze medal was Taku Hiraoka. This result was the first snowboarding Olympic medal for Japanese.
Shaun White, who was a candidate for the championship, was unable to demonstrate his true ability and finished in 4th place. At that time, in Sochi, which was warm and lacking in snow, it was not possible to make a good quality halfpipe, and it is said that Shaun could not get good results due to that effect. The Sochi was the most disappointing result for him.

In the women’s halfpipe, Kaitlyn Farrington(USA) won the gold medal. This result was a bit of a surprise, as Kelly Clark(USA) was expected to be a gold medal candidate.
In terms of Clark’s competition results, she should have won more gold medals at the Olympics, but she wasn’t able to get the smile of the goddess of victory.
The silver medal was won by Torah Bright(Australia), a gold medalist at the Vancouver 2010 Olympic Winter Games. She was originally a talented rider, but she was even more effective at the Olympics.

Vic Wild made him the first snowboarder ever to win two medals at the same Winter Games.
Wild originally competed for the United States, but after the 2010 Winter Olympics, the United States Ski and Snowboard Association shut down its alpine snowboarding program.
Instead of ending his career, Wild opted to leave the country; when he married Russian snowboarder Alena Zavarzina in 2011, Wild applied for Russian citizenship.

In the women’s PGS, the gold medal was won by Patrizia Kummer of Switzerland, the silver medal by Tomoka Takeuchi of Japan, and the bronze medal by Alena Zavarzina of Russia.
In the alpine event, Westerners were overwhelmingly strong in the world, but Takeuchi was the first Asian to win a medal.

At the Sochi Olympics, Parallel Slalom, the first and second alpine competition for snowboarding, was also held. However, this event was held only once at the Olympic Games.

Due to the popularity of freestyle at the 2018 PyeongChang Olympics, a Big Air event was added. However, at the same time, PSL disappeared.
Snowboarding superstar Shaun White, 31, has challenged his fourth Olympics.

In the slopestyle, the start of the competition was delayed due to strong winds, and the athletes were troubled by maintaining concentration and responding to the wind.
Meanwhile, the men’s gold medal was awarded to American young talent Red Gerrard, and the women’s to Jamie Anderson. She achieved the feat of winning a gold medal for the second consecutive tournament.
The course was very technical and a particularly impressive item was multiple takeoffs on the first jump.

Perhaps the most dramatic end of the men’s halfpipe final in PyeongChang among the snowboarding Olympics.
In the 2nd run, Ayumu Hirano(JPN) succeeded in making the cab double cork 1440 to the front side double cork 1440, which was the first in the Olympic Games! Hirano took the lead in this run.
Shaun’s second run was unsuccessful and he challenged the last third run. Shaun made the front side double cork 1440 on the first hit and made the cab 1440 clean on the second. After this, Shaun showed off his almost perfect routine by connecting his skills brilliantly, and finally won the gold medal in a big turnaround.

After the PyeongChang Olympics, Shaun and Hirano both announced that they would go to the Tokyo Olympics on a skateboard, and we expected the two rivals to face off in the summer as well. Unfortunately, Shaun wasn’t able to join the national team, and Hirano was able to participate in both his dream summer and winter Olympics.

For women’s, Chloe Kim(USA), who participated for the first time, won the gold medal. She became the youngest woman to win an Olympic snowboarding gold medal when she won gold in the women’s snowboard halfpipe at 17 years old.

Pierre Vaultier from France won the gold medal for the second consecutive tournament.
He was later named in the Top 5 of Snowboarding World’s Craziest Videos by Red Bull. Literally, he became the king of the cross world.

Ester Ledecká (Czech Republic) won gold medals in the super-G in alpine skiing and in the parallel giant slalom in snowboarding, becoming the first person to win two gold medals at the same Winter Olympics using two different types of equipment (skis and snowboard). She was the second woman to win Olympic gold in two separate disciplines but the first to do so at the same Winter Olympics.

Big air, a popular snowboarding event, has finally made its debut at the Olympics.
The first champions were Sébastien Toutant of Canada for men’s and Anna Gasser of Austria for women’s.