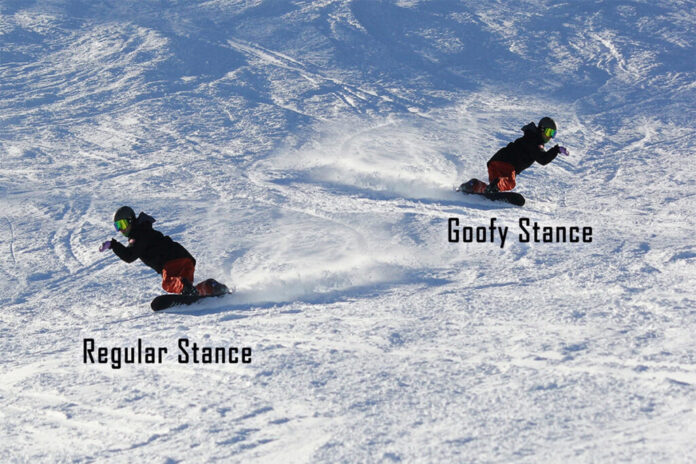 Just like in skateboarding, surfing, and other board sports, snowboarders can choose to ride with a regular stance or a goofy stance. Snowboarders should choose a stance that makes them feel the most comfortable while snowboarding.
However, it can be difficult for beginners who have never done sideway-riding sports to decide on a stance.
So let’s give you some advice on how to decide on your stance!

Many beginners cannot decide on a stance

I’ve been taking many beginner snowboarder lessons for over 30 years, but some beginners couldn’t decide their stance.
They doubted the stance they decided on first.

For example, a shop clerk usually recommends a regular stance, but when the person actually start snowboarding, they felt the other stance feels more comfortable. That’s why they asked me to change the snowboard to a goofy stance.

So I used a screwdriver to change the stance. But they had a troubled face again. “I thought Iwas a goofy stance, but it wasn’t. I want you to back to regular stance again.”
Oh gee…

You might think, “Is there such a troublesome person !?”, but in fact, there are many people who do not understand what stance to use.

When the board starts moving, beginners are too scared to shift their weight to their front legs and put all their weight on their back leg. If you do so, the tail of the board will come forward and move to the other side.
My daughter had the same issue. She was always zigzag slipping (pendulum) on the heel side.

Regular stance and goofy stance shown in the photo

Anyway, take a look at the pictures below to see which stance is called “regular” or “goofy” in the first place. Because some people don’t know about it.

Example of how to determine regular stance and goofy stance

The example below is said to be a regular stance.
Please see for reference.

・ People who have their left foot in front when playing baseball or golf
・ When kicking the ball, right foot
・ When tightrope walking, the left side will be in front
・ When you go into the pool, enter from the left foot

No one has a perfect regular stance and goofy stance

I don’t think there is a perfect regular stance and goofy stance.
So, again, I think the decision method introduced above is just a guide.

Some people have a “pretty” or “absolute” regular stance.
Also, some people feel uncomfortable with either stance, and it is hard to say either stance as a centrist.

It is also related to the dominant foot that the person originally had, the history of sports that he has walked through, and exercise habits.

For example, when he was a kid, he was standing in the right batter’s box playing baseball. He was kicking with his right foot when he played soccer. When he started skateboarding as a kid, he became regular stance because his brother was a regular.

There will be some people who have a regular stance like the one above.

On the other hand, some people can’t decide on their stance. But don’t worry!
Because, in the end, snowboarding should be in either stance. So, let’s practice so that you can make a turn with the stance you decided for the time being. And if you could snowboard the green slopes, start practicing the reverse (switch) stance.

●You can also refer to this video. Please check it.
https://youtu.be/UzVBSo9Xx6k

●The following content is also recommended for beginner snowboarders.
https://dmksnowboard.com/9-tips-for-the-first-day-snowboarding-for-beginners/