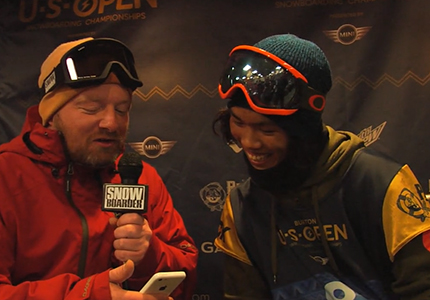 2015 Burton US Open – Halfpipe Finals from Snowboarder Magazine on Vimeo.

It has been twenty-seven years since halfpipe debuted at the Open and since then, it has reigned as one of the most iconic transition contests in all of snowboarding On Saturday, March 8, 2015, under sunny, blue skies, the men’s and women’s halfpipe finals at the thirty-third iteration of this iconic contst continued to provide a benchmark in style, trick depth, and progression. From first place men’s finisher Taku Hiraoka’s massive airs, to Arthur Longo’s styled out tweaks, to Chloe Kim’s first-ever 1080, and Kelly Clark’s three-peat, further solidifying her position as the rider with the most USO wins ever, it was an impressive day of competition. Enjoy the highlights in the 33rd Annual Burton US Open Snowboarding Championships halfpipe finals video.