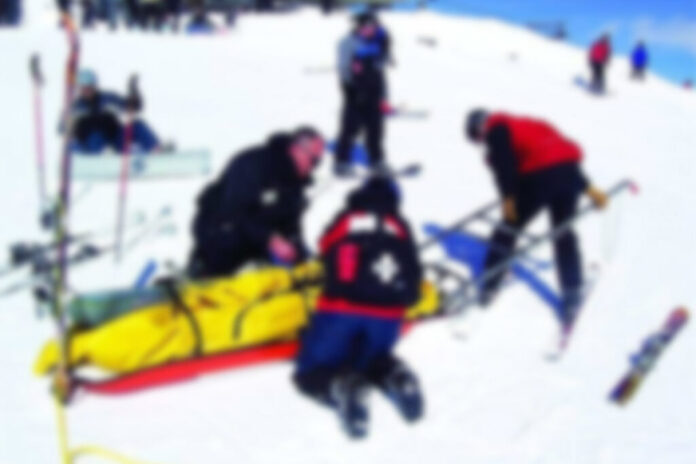 Having fun on the slopes is always a priority; however, the highest priority should be your own safety. There are still collisions between skiers and snowboarders happening everyday–creating injuries, and in worst cases, fatal accidents.

Having a fun day on the slopes can result in a horrible day in the midst of an accident. Hearing about these kind of stories can leave one with fear and restraint.

Every time I hear about such an accident, I feel very sad.

So in order to increase the safety for everyone on the mountains, I have made a safety guideline with precautions that has been created using the knowledge I have gained through my many years on the slopes.

The two main causes for snowboard and skier collisions…

This can be a hazard…

How to avoid collisions and things to watch for…

Cause 1: Snowboarders tends to go blind on heel side

One of the biggest hazards is the “heel side blindside”.
Many beginners and even intermediates are blind on the heel side turns.

See the picture above!
The Snowboarder facing the red ↓ is looking downwards, having your attention not looking forwards causes a much bigger risk for collisions. One should always be aware of the surroundings around them. I always teach my students to face forwards (←green arrow), turn your neck like an owl, and line up your shoulders with the board.
Frequent checks behind you will also help, so let’s try keep everyone safe!

Cause 2: Skiers pay attention to only what is in front of them when they accelerate

Skiing these days has progressed to the point that they are able to rip down runs and pay less attention towards their surroundings.

This is being demonstrated in the video below.

Collision accidents tend to occur due to the combination of the snowboarders blind side, and the narrowed view of the skiers.

Those who wants to cut or pass through should be aware for other people on the mountain. Choose to make a decision for safety first and don’t feel bad to go slow.

However, there are skiers who are willing to pass from behind and cut across snowboarders without any heads-up!! I recommend to give a HEADS-UP notice. If you want to make a tight cut or if you want to pass through someone in front, do not hesitate to SHOUT, YELL, SCREAM. Let them know and others to prevent from crashing.

Basically, those who pass from behind need to be careful since the person in front cannot see them.
However, snowboarders should also be careful of the blind side when riding on the heel side.
Look back every few turns to see if anyone is coming from behind. Try using little neck turns from left to right to check your surroundings.

Please see the video below, 1:19.
This is a bad case for skiers, but it’s a classic example of what I’ve explained so far.

Dangerous places where collisions are likely to occur

Where are collisions likely to occur?
I will tell you based on my experience.

Near the chair lift

A place where a lot of people gather is likely dangerous. You should always feel like giving a 360-degree look.

Many beginner or even intermediate snowboarders are not good on flat and narrow runs which are called Cat tracks. Collisions occur frequently in such places.
If you have a regular stance, keep riding on the left side as much as possible to ensure visibility. If you have a goofy stance(opposite stance), you should keep riding on the right side as much as possible.

A place where you can easily speed up

In the two examples introduced so far, it is unlikely to be a catastrophe because of an accident between relatively low speeds. However, in places where everyone is going faster, a heavier collision can occur.

For example, a place that changes from a medium / steep slope to a gentle flat slope.

Here, the steep slopes makes it easy for a person to speed up, so the field of vision is easily narrowed where it is difficult to check your surroundings and collisions may occur. However there are beginners who can’t handle such speed and they collide with skiers/snowboarders enjoying the slow mellow runs of the mountain.

It may seem surprising, but advanced slopes such as ultra-steep slopes are safer in terms of collisions. This is because the skiers and snowboarders are more in control using gravity and its speed and on such slopes it is important to prioritize adjustment of speed to keep your speed in control.

Things to watch out for to avoid collisions

Finally, I would like to tell you what you need to be careful about to avoid a collision.

If a regular and a goofy stance snowboarders ride along together, they tend to be blind on each heel turn, so be careful!!
This collision is also very common. I often witness this.

In a crowded places look around before you start riding.
Make sure that there are no skiers who are speeding up behind you.
Keep in mind a 360-degree field of view.

Avoid and be careful of rush hours

Consider rush hour in your schedule, especially at ski resorts that are crowded on weekends.
Be aware of the lifts closing hours. These are the hours where the mountain gets busy. In my experience, more people go up to the mountain before noon than in the early morning hours, and are busier at closing time because people go down the hill almost at the same timing.

So before shredding down the hill always take a good look around and try to ensure your safety.

If possible, we need to avoid busy days and times, but sometimes we have to snowboard through crowded areas. In such a case, please be careful.

As I say many times, please don’t speed up in crowded places. Look around often.
It’s a good idea to snowboard in the morning, aiming for a relatively more free time.

●At Flat & Narrow Long Runs (Cat Trucks), there are many collisions between skiers and snowboarders.
Please check this content as well.
https://snowboardtips.net/how-to-snowboard-on-flat-narrow-long-runscat-trucks-beginner-snowboarding-tips