Welcome to the Team Tadashi Fuse.

I’m so proud to have Tadashi joining Deeluxe as an international team rider. This year marks the twentieth anniversary for Deeluxe and, coincidentally, it’s also the twentieth anniversary of Tadashi’s career as a pro rider. Tadashi became the first rider from Japan to gain worldwide recognition as a pro. He was also the first Japanese rider to get a full part in a Mack Dawg movie. He continues to ride at the top of his game while making strong contributions to the snowboard industry. And needless to say, he has countless fans across the globe. I’m excited to watch the next stage of Tadashi’s career unfold—and to see him riding in his Deeluxe Empires.

Deeluxe’s twentieth anniversary and the addition of Tadashi to the team go hand in hand. He’s one of snowboarding’s great—and he’s as strong as ever.
We could not ask for a better ambassador to Japan and the rest of the world. Welcome to the family Tadashi!!

TADASHI FUSE – Welcome to the DEELUXE Team. from DEELUXEboots on Vimeo. 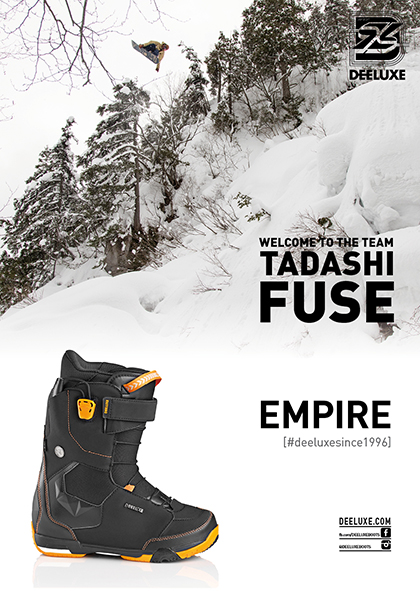