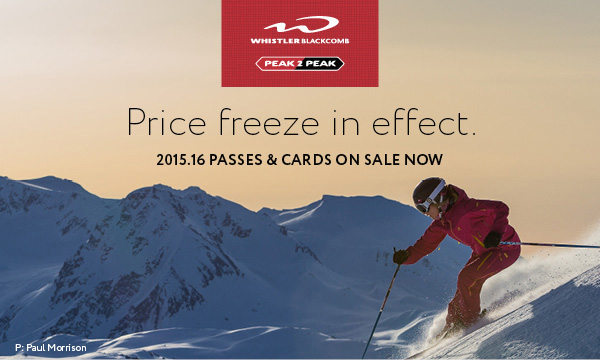 Lock In The Best Rates And Get Even More With Your 2015.16 Season Pass Or EDGE Card

With the official change of the seasons Whistler Blackcomb is rolling out its best deals on Season Passes and EDGE Cards for its 50th anniversary season, Winter 2015.16. Whistler Blackcomb is pleased to announce a price freeze on last spring’s rates for both Season Passes and EDGE Cards, as well as new incentives for guests to purchase their Pass or EDGE Card before the spring deadline of May 4, 2015.

Guests can now take advantage of the lowest prices guaranteed on Season Passes for next winter with a $199 down payment by May 4. New Season Passholders’ down payments will also allow for unlimited spring skiing during the current season, until May 18, 2015. Three, five and ten day EDGE Cards are also available at last spring’s rates, with limited time offers including the bonus of unlimited skiing early season for five and ten day Cardholders in 2015.16.

Spring deals are as follows:

Available for residents of Canada and Washington State.
Unlimited early season skiing from Opening Day to December 18, 2015.
New! Two free tickets for night skiing at Grouse Mountain in 2015.16.
Add unlimited 2014.15 spring skiing from March 30 – May 18 for $79 (Adult).
One free sightseeing ticket for summer 2015.

Available for residents of Canada and Washington State.
*All prices quoted in CDN funds unless otherwise specified. All prices are subject to 5% GST. *USD rates are based on an exchange rate of $1.20 CDN per $1.00 USD, rounded to the nearest dollar. Actual rate may vary. All purchases are transacted in Canadian dollars. Prices shown at “Adult” rates only.

Winter operations are still going strong this season with plenty of spring skiing and snowboarding to be had at Whistler Blackcomb until April 19 on Blackcomb and May 18 on Whistler. Whistler is packed full of activities this spring including the World Ski & Snowboard Festival on April 10-19, 2015, and Nintendo Family Fun Day on April 4, 2015.

Families looking for a way to stay active and have fun during the Easter long weekend are in luck! Nintendo Family Fun day is back and better than ever.

On April 4, 2015, families, Snow School participants and kids of all ages can hit the slopes of Whistler and head to either Chic Pea Hut or the Nintendo Gaming Lounge in the Roundhouse Lodge to sign up for all kinds of activities. There will be games, face painting, and some great prizes from Nintendo, among other amusements. Everyone should keep their eye out for Mario and Luigi who will be hanging around the Chic Pea Hut all morning. The festivities run from 10:00am – 1:30pm and are FREE!

Guests looking to plan a trip to the consistently rated No. 1 Mountain Resort in North America can visit whistlerblackcomb.com/deals_packages or call 1-888-403-4727.

The 20th annual World Ski & Snowboard Festival (WSSF) is just around the corner in Whistler, BC April 10-19, 2015. Visit www.wssf.com/Media to register for media accreditation.
About Whistler Blackcomb
Whistler Blackcomb, the official alpine skiing venue for the 2010 Olympic and Paralympic Winter Games, is situated in the Resort Municipality of Whistler located in the Coast Mountains of British Columbia 125 kilometres (78 miles) from Vancouver, British Columbia. North America’s premier four season mountain resort, Whistler and Blackcomb are two side-by-side mountains which combined offer over 200 marked runs, 8,171 acres of terrain, 16 alpine bowls, three glaciers, receives on average over 1,164 centimetres (458 inches) of snow annually, and one of the longest ski seasons in North America. In the summer, Whistler Blackcomb offers a variety of activities, including hiking and biking trails, the Whistler Mountain Bike Park, and sightseeing on the PEAK 2 PEAK Gondola.