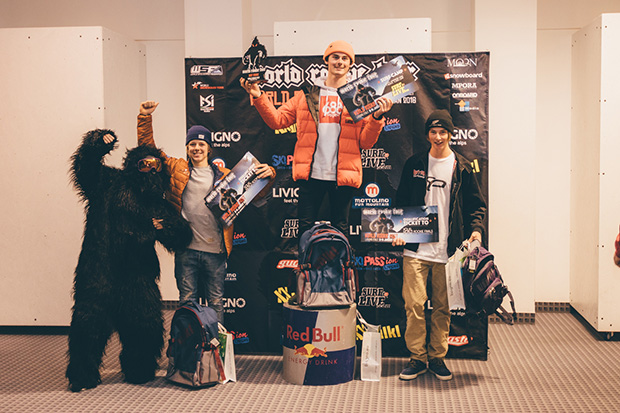 Netherlands is the Best Team of the 2016 World Rookie Fest
Erik Bastiaansen and Henna Ikola best riders at the Mottolino Snowpark, Livigno

World Rookie Fest, the most famous youth snowboard freestyle event in the world, took place in Livigno, Italy, at Mottolino Fun Mountain, with 155 riders from 18 different nations. The largest edition ever was a big success despite the unstable weather conditions, so that qualification day had to be cancelled due to heavy snow storm and strong wind.

However, for the final day the organizers could use a window of less wind and made contest with two runs for each rider in each category, and the international young snowboarders were able to push the competition at a high level.

Black Yeti proved once again that the future snowboard pro riders are just around the corner. After Norwegian team’s nine consecutive victories as Best Team, and the last year victory of the Swiss Team, another team wins, Netherlands, with two riders at the top of the Rookie Boys’ rank and a second place in the Grom Boys’ category.

“Luck of snow and bad weather didn’t stop the event thanks to the energy of a great staff, motivated riders, an enthusiast crew and the shaper team of the Mottolino Snowpark.” stated Marco Sampaoli, WSF Vice President and event organizer “We are very happy for this successfully edition, the largest but also the most difficult edition ever”.

Dutch young gun Erik Bastiaansen took the first place in the Rookie category with a solid run. He impressed the judges and scored 90.03 points in his second run with Cab10 indy on the jump and Cab180 to 50-50 3 out over the a-frame. Erik wins ahead of another dutch rider, Niek Van Der Velden, and the Australian “Party King” Tom Harveyson.

The high number of Groms was an impressive element: 55 of 155 participants were under 14, showing a powerful renewal among the new snowboarders. Best Grom of the 2016 World Rookie Fest was young Swiss rider Elias Rupp, wins with a stylish run: Switch Back7 mute to cab 180 in 50-50 back 180 out from the a-frame. Casper Wolf from Netherlands and Samuel Camenzind from Switzerland.

On the girls’ side, Finnish rider Henna Ikola left 15 other Rookie Girls behind her by landing a huge Backside540 indy on the big kicker to a stylish cab 180 to 50-50 on the box. In the rest of Scandinavian podium two Norwegians: Nora Frisvold and Hanne Eilertsen.

Tina Steffensen from Norway showcased a great performance as best Grom girl with a huge Backside360 tail on the big kicker to 50-50 out from the a-frame, ahead of Luan Salgueira from France and Emma Gennero from Italy.

“Probably it was one of the most difficult competition I’ve directed ever. Due to bad weather for 4 days in a row we were forced to change the program more than one time, change course, but I never give up. The working team and Mottolino Snowpark were always ready to follow my reserve plan and in the end, we did it. Thanks to riders, coaches, parents to the patience, and a special thanks to my team” stated Gian Luca Zanetti, WRF Race Director.

Black Yeti congratulates all the riders who showed great style, battling the slopestyle in such hard weather conditions.

The WSF World Rookie Tour is organized by The Black Yeti in collaboration with World Snowboard Federation and its National Snowboard Associations, and it is made possible by Red Bull and Volkl Snowboards. You can follow the World Rookie Tour on our international media partners Onboard European Snowboard magazine, Cooler and MPora. 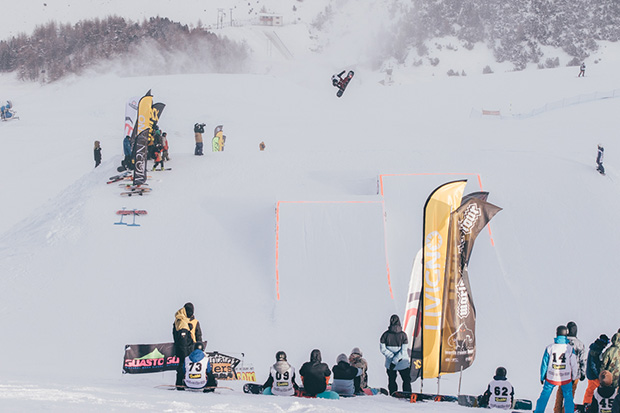 If you dream to become a professional snowboarder,
then your future starts from Rookie Fest!

ABOUT THE WORLD SNOWBOARD FEDERATION
The World Snowboard Federation (WSF) is the international organization exclusively working to develop the sport of snowboarding at all levels. Program areas include: competitions, Para-Snowboard, judge and shapers, education and certification, and snowboard activities for riders of every age. The WSF represents a network of National Snowboard Associations (NSAs) who work together at a worldwide level to promote the development of snowboarding. NSA members can find a source of inspiration and support from the WSF for the activities they are conducting within their nation and by working towards the same goal: progression of snowboarding from the ground up. The WSF collaborates with the TTR Pro Snowboarding, the owner and operator of the TTR World Snowboard Tour and the TTR World Ranking System. Through this collaboration and coordination of events at the TTR World Snowboard Tour, The WSF and the TTR want to create an environment that fosters the development of competitive snowboarding. In February 2012, the WSF and the TTR hosted the inaugural World Snowboarding Championships in Oslo, Norway, an elite level event to be held every four years in alternating cities around the world. Official website: www.worldsnowboardfederation.org.

About TTR Pro Snowboarding & World Snowboard Tour
TTR Pro Snowboarding is a non-profit organization that oversees a professional network of events and athletes. Our objective is to develop and showcase the sport of snowboarding through the World Snowboard Tour, while facilitating a fair and open competition environment that includes innovative judging and ranking systems. We encourage riders to develop from rookies into world-class athletes through a 6 Star level rating system; which will be replaced by a new 4-tiered structure from October 2014. Under the new World Snowboard Tour 2.0, the 4-tiered structure will encompass Elite, International, National, and Regional event levels. Elite events will comprise the WST Pro Series (current working title). The Regional, National, and International levels of the WST 2.0 will make up the WST Qualifying Series (working title).