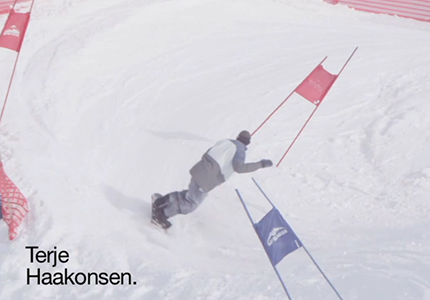 The most prestigious and coveted award in all of snowboarding is NOT a gold medal from the Olympics, it is the legendary gold roll of duct tape given to the winner annually of the Mt. Baker Banked Slalom. The best riders from all over the world come out of the wood work to test themselves on Mt. Baker’s epic terrain, but it is much much more than just a contest, it is a gathering of the tribe of snowboarding, a hallowed event that is a rite of passage for core snowboarders around the globe. The LBS is shrouded in legends but none more than that of Terje Haakonsen. Terje is almost synonymous with tall tales and epic stories of races past and no one has won the race more times or added to the mystique than him.

This year was no exception a low snow year resulted in the course being moved slightly and cold temps left the course savagely icy. Once again the man from Norway added to his legend by passing someone in qualifiers, as well as posting a faster time than the winning time……….switch (he did this in the switch race). The race is far from all about 1 person however, it brings out elusive legends like Temple Cummins, Scotty Wittlake, Josh Dirksen, and many more. Pros like rider of the year Gigi Ruff, Lucas Debari, Austin Smith, Marie-France Roy, Bryan Fox, and countless others compete alongside friends, family, and snowboarders from all walks of life.

Thank god for snowboarding and thank god for The Baker Banked Slalom to keep reminding everyone how great awesome riding a snowboard with friends is.